The Impact of Automation on the Future of Work in SA 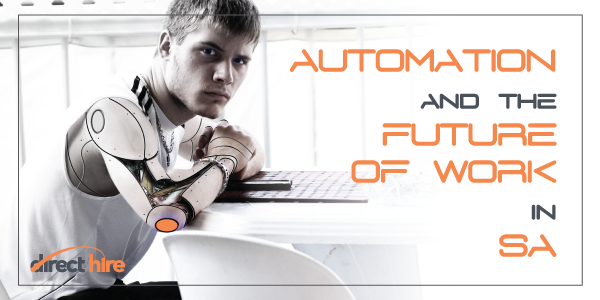 It can be a daunting task trying to predict the trajectory of the future of HR and how digitization is going to change the landscape of the industry. This is mainly due to the nature of technology in the fourth industrial revolution being incredibly unpredictable.

Recently, we have been inundated by views of the future from the media.  The science fiction genre has in fact seen substantial growth in popularity over the last couple of years.  There’s even a new sub-genre of science fiction called “near-fi”.  Near-fi takes existing tech and extends just a little bit further.  Unfortunately, the future view is never a bright one. It is inherent that this subggenre paints a gloomy dystopian future.  If you’ve watched a few episodes of the Netflix series Black Mirror, you know exactly what I am talking about!

We really shouldn’t be surprised; the world is a different place and we’ve been warned about the changes for long time.  Change is a gradual process; it doesn’t often occur in a dramatic way.  Automation Technology like Artificial Intelligence (AI), in spite of what some people may say, should not be seen as disruptive technology but rather as enabling technology.  Automation and AI are already part of our everyday lives.  Think about how integrated technology is in what you do every day – commuting, navigation, shopping even deciding what to have for dinner.

Incremental change is currently underway and will impact the future of work in SA, changing the economic and business landscape as we currently know it.  It is estimated that in the next 5-10 years, 35% of South African workers (roughly 4.5 million people) are potentially automatable.  Considering we are already feeling the socio-economic impact of a 27% unemployment rate this sounds rather bleak.  It’s not surprising then that we’re all developing a small amount of “robo-phobia”.

I don’t think that we should see this inevitability as a negative though, in fact I think it is the complete opposite.  History has shown us that we should consider technology as an enablement tool, not something to replace humans but to rather augment humans for the better in order to take us forward. Tech replacing jobs is nothing new; it’s been a major cause for concern in all of the previous industrial revolutions. There is not much validity to this concern as new technology has the power to create as much work, if not more, than it displaces.

When one examines any 10-year period in a majority of economies, developed and developing, 10% of the occupations didn’t exist in the previous 10-year period.  On a macro level, technology grows the number of jobs because it increases productivity, which drives economic growth and creates new jobs and entirely new industries.

Uber drivers, 3D printing technicians, social media managers – these are all completely new jobs we didn’t dream of when we were growing up. Some jobs decline, but many others actually grow and rise. Another way to think about this is to consider that over the entire history of mankind, technology has already taken over 90% of the jobs we used to do.

This fact highlights the importance of embracing new technological innovations, to enhance our skills and capabilities and influence our HR strategies across the board.  With ever increasing competition for scarce skilled talent, utilizing technologies that can automate time consuming activities can greatly affect an HR teams ability to win the war for talent.